Seneca Falls NY finds itself at the crossroads of the Finger Lakes region. Located between Seneca and Cayuga lakes, Seneca Falls also finds itself at the crossroads of History. The Women’s Rights movement was founded in Seneca Falls in 1848, that world changing event is celebrated every day at the Women’s Rights National Historical Park. The Wesleyan chapel the scene of that first convention has been restored and visitors to the Historical Park

can learn about those events every day.

Seneca Falls also finds itself as the home of the Women’s Hall of Fame, the new headquarters for that venue will be open in 2018 in the restored Seneca Knitting Mills building located directly on the Erie Canal. 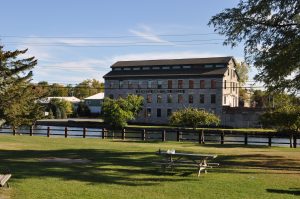 The Seneca Falls Heritage Area interprets the village’s development and role in the Reform Movements of the 19th. century. The area features a classic main street, a well-appointed harbor on The Cayuga-Seneca Canal, as well as many historic homes and architecturally interesting neighborhoods. The Heritage Area’s visitor center serves as an orientation point for local and regional history, providing an historical overview and information on various area attractions.

The Seneca Museum of Waterways & Industry is located at 89 Fall Street in the middle of historic downtown Seneca Falls and serves as a point of interest for local and regional history. The Museum provides a historical overview illustrating how the Seneca River and the Cayuga-Seneca Canal powered the rise of industry and fostered cultural development.

History continues at the Historical Society Museum located at 55 Cayuga Street in Seneca Falls in a home with long and varied history. The original structure was built in 1823 as a one room wooden house. Edward Mynderse son of the early land developer Colonel Wilhelmus Mynderse erected a two-story brick structure around 1855 on the site. The Historical Society bought the building in 1961 and the house you see today has undergone no major changes since the 1880’s

Frank J. Ludovico Sculpture Trail lies along the south side of the Cayuga-Seneca Canal leading west along the Canal from the village. The Trail’s Visitors and Arts Center is located at 61 Ovid Street, Route 414 in Seneca Falls. 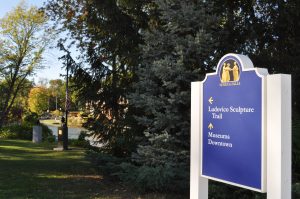 Seneca Falls is also rumored to have been the inspiration for Frank Capra’s Classic movie it’s a wonderful life. Frank Capra was thought to have spent time in Seneca Falls prior to the production of the movie, a visitor to the town can identify many venues similar to those in the movie. Seneca Falls celebrates the movie with a celebration during early December each year. The It’s a Wonderful Life Museum is in downtown Seneca Falls, for more information visit their web site at www.therealbedrordfalls.com

One of the most photographed venues in Seneca Falls is the Trinity Episcopal Church. Built in 1885 in the Anglo-Gothic style. It is famous for its rising tower and stained glass some of which were made by the Louis Tiffany Studios. The Church is located at 27 Fall Street along the western end of Van Cleef Lake. 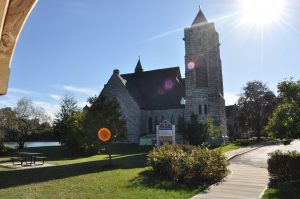 The Elizabeth Cady Stanton House, home of the women’s rights leader, is open for guided tours by the National Service Rangers.

Seneca Falls offers visitors of all kinds a complete experience, whether you arrive by boat and utilize any of the more than 900’ of docking space, equipped with electrical, water, Wi-Fi and a boater amenities center which includes bathrooms, lounge, showers and laundry all available to the boater for FREE, bicyclists and hikers can enjoy the same level of experience and they travel through Seneca Falls,

For a visitor Seneca Falls enjoys many restaurants, hotels/motels, bed & breakfasts as well as historical sites and museums some of which are highlighted above.