A large four story building that stood on the northwest side of the canal had a rich history and several different names.  It started as a flour mill which was destroyed in 1859 and came back to life in 1883 as the Ontario Preserving Company.

The property was leased to the company by Buel P. Barnes who stipulated that it could only be used as a canning factory.  Mr. Barnes at that time owned the flour mill on the corner of North Hartland and Sherman Road and wanted to make sure he had no new competition. Managed by Mr. Charles Francis with Mr. Jay S. Vary as superintendent, processor and chemist, the plant was known for packing peas which were shelled every morning by local housewives and picked up by horse and wagon before noon so they could be processed by evening. 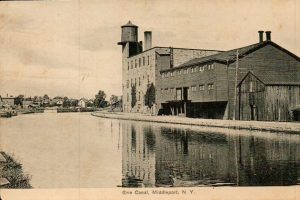 As the cost of peas made the product no longer profitable for the plant, it switched to pineapples, naval oranges, strawberries, cherries as well as a large variety of other fruits and vegetables.  The plant had the first acetylene gas units to replace the old kerosene lamps as well as a steam engine to provide additional power and  Middleport’s first sprinkler system for fire protection.

The plant was an active employer of around 500 local residents and several additions had to be made to the building to house the new equipment.  In 1891, the Sprague-Warner Company of Chicago,Illinois purchased the plant and the name was changed to the Batavia Preserving Company.  The Middleport plant continued to preserve fruits while another plant in Batavia handled most of the vegetables.  The plant was again sold in 1913 when the Batavia Preserving Company decided to leave Western New York.

After several more owners who ran it as a canning company, the last name on the building was Longview Farms Inc. which was run by Louis Catalano and R.C Walthew.  After a destructive fire in the 1960’s, the building became a safety hazard and was demolished in 1967.

Information for this article came from a 1966 essay written by Elmer Vary, longtime resident of Middleport