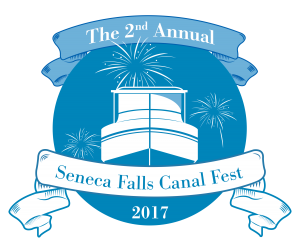 Join us at the 2nd annual Seneca Falls Canal Fest. This year’s event will be held on July 7th, 8th and 9th. at the Canal Harbor in Seneca Falls NY.

Seneca Falls has set out to recreate the events that were first held in the early 1960’s when thousands of visitors and what seemed like 100’s of boats crowded the Canal Harbor.   Last year attracted more than 10,000 visitors who attended the three-day event and this year there are even more events scheduled and more promotion planned to ensure an even larger event.

Back again this year is the Women’s Right to Rock concert series, with more than 30 bands performing over the weekend.

The Aquacade is back again for 2017. Last year it attracted a variety of decorated boats and with cash prizes for 1st, 2nd, and 3rd. place the competition is shaping up to be bigger and better. 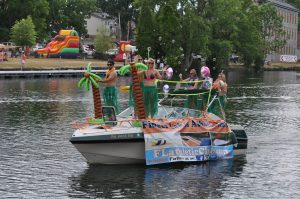 Canal Fest covers both the North and South sides of the Seneca Falls Canal Harbor. The Seneca Falls Business Association which promotes the event has doubled down on the promotion for this year’s event. Fireworks are scheduled for Saturday evening and the Duck race will once again be held on Sunday afternoon.

The Corning Museum of Glass will be featuring their  Glass Barge this year at Canal Fest. 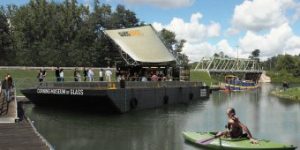 This will be one of three stops that the barge will be making along the Canal system this year. As Corning celebrates the bicentennial of the beginning of construction of the Erie Canal and the upcoming 150-year anniversary of Corning Glass.

The SFBA is encouraging local wineries and breweries to exhibit as they have opened the entire North Side of the Canal as an adult beverage area. The kids will have plenty to do at Canal Days with rides and entertainment set up on the south side of the Canal.

Seneca Falls is located at mile 9 of the Cayuga Seneca Canal. For the boating community, it offers lots of docking for transient boaters on the North and South Canal walls. It offers FREE electricity, water, and wi-fi to boaters as well as having one of the best boater centers on the Canal system with restrooms, showers and laundry.