2022 Navigation Season on the Erie Canal!

Mariners are advised that, conditions permitting, all portions of the New York State Canal system are scheduled to open Friday, May 20, 2022, at 7:00 a.m. for the 2022 Navigation Season. If adjustments to the schedule are necessary, the public will be notified accordingly. There are no tolls or fees for recreational use of the Canal system this year.

The hours of operation for the 2022 season are as follows:

The following locks and lift bridges will operate with extended hours, through peak navigation season May 20 through September 14, as follows:

In addition to the structures listed above, Locks E-21 and E-22 in New London will operate with extended hours, on demand, from 7:00 a.m. to 10:00 p.m. Thursday through Monday from May 20 to September 14. Due to roving operations, some delays may be experienced during certain periods.

Mariners should plan accordingly for scheduled lockages at Champlain Canal Locks C-7 and C-8 in Fort Edward this season. Details regarding the schedule will follow in a subsequent Notice to Mariners. More information can be found here.

The Canal Corporation continues to seek seasonal employees to staff the locks and lift bridges across the Canal system. Extending operating hours at the Waterford Flight and Lock E-7 (Niskayuna) for example are contingent on adequate staffing levels. Those interested in applying for a position should visit the Canal Corporation’s website.

All Canal users are encouraged to learn how they can assist in mitigating the spread of aquatic invasives species to ensure the Canal’s resiliency for generations to come and help protect New York’s waters from invasive pests. For more information on the Department of Environmental Conservation’s Aquatic Invasive Species Boat Steward Program, please visit DEC’s website.

The E-Houseboat is being designed and built to be the first all-electric propelled and powered houseboat commercially available within the US.

The design team at East Coast Houseboats has been actively working on a completely unique way of building houseboats, and the E-Houseboat will be the first to benefit from this method.   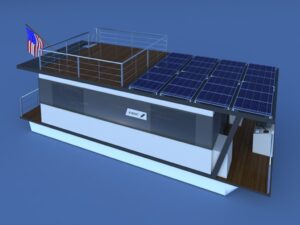 Starting with a fiberglass pontoon platform, the hulls are designed to minimize weight and provide less resistance as it travels down the waterway.  The cabin is built completely with lightweight composite materials but without sacrificing the level of year-round comfort that is common to our standard boat designs

East Coast Houseboats has been fortunate enough to partner with marine industry leaders such as Yanmar Mastry and Glendenning Marine to provide the propulsion and control engineering.

The design includes the necessary infrastructure to not only propel the boats, but re-charge it’s battery bank as she plies the Erie Canal in part due to the large rooftop array of lightweight solar panels.

Capitalizing on the latest lithium-Ion battery technology, controls, and propulsion from industry leaders, and including features such as 12v led lighting throughout, 12v refrigeration, 12v HVAC.  All of which include products chosen for their ability to be integrated into the overall design and build of the boat. 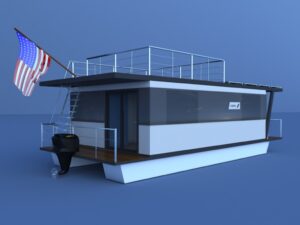 At 30’ LOA, with a beam of 12’ the E-Houseboat will comfortably accommodate a family or 4 as a cruising houseboat or can be configured as the perfect day boat anchored in a cove.

Looking to design your own version, we can build these boats from 22’ to 30’ and in beams from 10’ to 15’9”.  The engineering can be configured to focus less on daily cruising and more on daily living, as an example these boats could be completely off the grid cabins located in remote locations.

Outdoor spaces include a front deck, as well as a large roof deck space perfect for great views and sunsets. 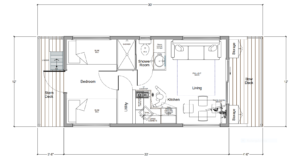 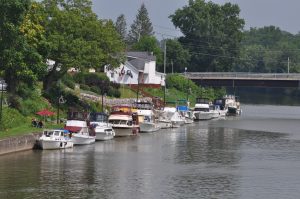 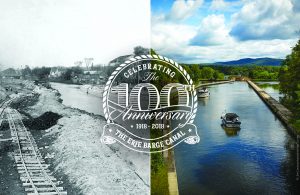 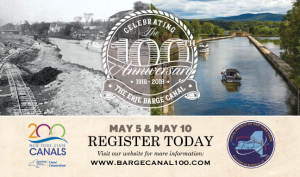 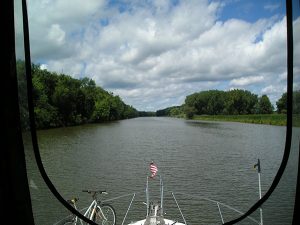