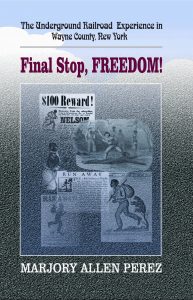 The book includes biographical sketches of men and women who set their hopes on freedom and boarded the Underground Railroad between 1800 and 1865. Thomas and Agnes Watkins were brought as slaves from Virginia to Sodus Bay by Captain William Helm about 1800. In 1810 they fled from slavery, taking with them their infant son, Edward Lloyd and Susan Chase and their six children arrived in Macedon NY about 1844, but within a few years felt compelled to continue their journey to freedom, moving to Canada. In 1863, William Scott, then known as William Bacome took advantage of the disruptions of the Civil War in Tennessee to begin his odyssey to freedom, traveling first to Massachusetts and eventually to Huron, New York where he set down deep roots and raised his family

Perez stated that the impetus to turn her research into a book was spurred on by a project, spearheaded by Dr. Judith Wellman, professor emeritus at the State University at Oswego that surveyed the Underground Railroad, abolitionism and African American Life in Wayne County. Completed in 2009, the report revealed that many Wayne County residents played a critical role in both the Underground Railroad and in reform movements of the day.

Last Stop, Freedom will be on sale at local historical society gift shops or by contacting Ms. Perez at (315) 946-4562 or at Marjory.perez1944@gmail.com The books retail price is $17.95 Discounts are available to libraries, schools, museums and retail shop